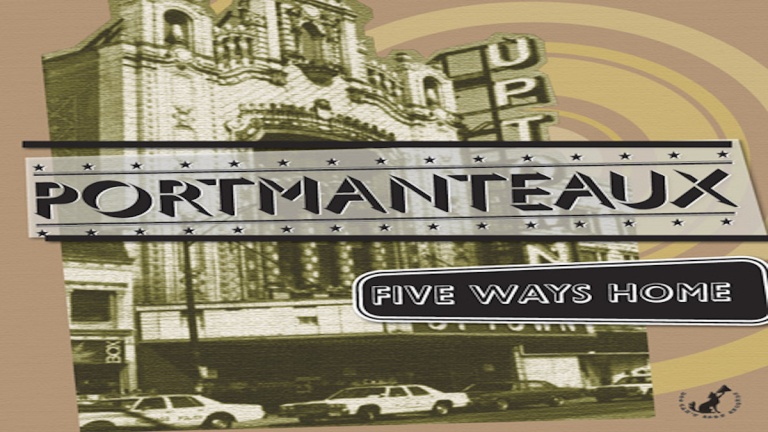 This CD release from Melbourne band Portmanteaux “Five Ways Home” features more of their signature funk / jazz style instrumental tunes that groove and swing. Is it jazzy funk ? Is it funky jazz ? You be the judge….

“Five Ways Home” is Portmanteaux’s second CD, following up from their initial six-track EP-style CD “General Eclectic”. This second 13-track CD consists of original material and is all instrumental. Again, the material is based around a Hammond/guitar/bass/drums combo sound, but ranges from funk to blues and Latin grooves.

‘Five Ways Home’ and ‘Have You Got Enough?’ are both in the vein of The Meters and Booker T & the MGs. Harder funk numbers include ‘Give a Little’, ‘Swing in Her Step’, ‘Taz’ and ‘Falling on My Feet’. ‘Not Quite Right’ is a slower funk number with a heavy bass line and soprano sax.

‘Ejam’ is reminiscent of swamp rock purveyors such as Tony Joe White and Credence Clearwater Revival. ‘Preston Piece’ was written by Steve Malkin on the death of Billy Preston and ‘Flyaway’ is a medium-paced Crusaders-style instrumental.

‘Reflections’ and ‘Bright and Breezy’ are both tunes in the Brazilian tradition. ‘Freddie’s Driving’ is dedicated to the late great Freddie King – composer of Hideaway’, ‘The Stumble’, ‘Driving Sideways’ and ‘Sidetracked’– a huge influence on Eric Clapton and Peter Green.

Where can I get a copy?

It’s been around four years since this red-hot Victorian ensemble released their debut EP-CD General Eclectic, leaving us wanting more. Running 52 minutes and offering a baker’s dozen all-original compositions, Five Ways Home has been worth the wait. An all-instrumental combo such as this fills a wide gap in Australian rhythm and blues. To say they are Down Under’s answer to Booker T & the MGs or The Meters is to sell them a bit short, although their sound at times resembles that of New Orleans’ Papa Grows Funk or New York City’s Dap Kings. The syncopated funk of ‘Swing In Her Step, ‘Have You Got Enough’, ‘Give A Little’, ‘Falling On My Feet’, ‘Taz’, and the title cut hits right on–the-one. But they go way beyond that. ‘Ejam’ has a Stax feel to it, ‘Bright And Breezy’ and ‘Reflections’ lock in Brazilian grooves, ‘Not Quite Right’ has a soul-jazz feel and ‘Flyaway’ is in the R&B tradition. Also, in the R&B style, ‘Preston Piece’, was written in honour of the late Billy Preston by organist/keyboardist Steve Malkin, and Freddie’s Driving’, penned by Malkin and guitarist Henry Jackson, pays tribute to blues guitar legend Freddie King. Though Malkin, who also arranged the brass parts – and Jackson are the chief music writers, other band members including alto and soprano sax player Philippe, bassist Nick Allen and drummers/percussionist Michael Frawley and Greg Murray also contribute. Vocals would be superfluous in a band like Portmanteaux. Their dynamic instrumentation, lively interplay, jaw-dropping solos and deep grooving rhythms have much in store for lovers of blues, jazz, funk and Latin music. Al Hensley, Rhythms Magazine, March, 2010, page 81.